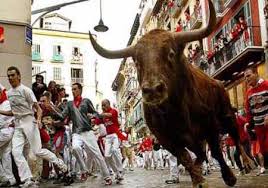 From July 6th to 14th every year the eyes of the whole Spain (and not only) is turned into Pamplona. The Sanfermines celebrations take place. When the chupinazo (ceremonial rocket) is fired the city explodes into life. Thousands of people from all over the world come to the city to live a unique experience. For nine days Pamplona dresses up in red and white and its streets turn into a feast of friendship, joy, music and partying.

The ‘encierro’ or The Running Of The Bulls is the most characteristic part of the Fiesta of San Fermin. It is held at eight o’clock each morning from the 7th to the 14th of July inclusive. 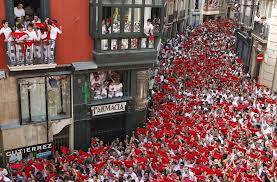 It consists largely of young men (although women may also run) who run in front of the bulls to lead them into the bull-ring. The length of the running of the bulls is around 875 metres and it usually lasts from two to three minutes. The participants are not only from Spain, thousands of people from all over the world come to celebrate San Fermines and some of them are also brave enough to give a try to running with the bulls. You don’t have to sign up anywhere to take part; you just enter into the run and choose the street where you will run and try to do as best as you can.

The origin of the fiesta of San Fermín goes back to the Middle Ages and is related to three celebrations: religious ceremonies in honour of San Fermín, trade fairs and bullfights, which were first documented in the 14th century. Initially, the fiesta San Fermín was held on October, but in th 16th century the people of Pamplona, fed up with the bad weather at that time of year, decided to transfer the fiesta to July so it would coincide with the Fair. This is how the Sanfermines were born. 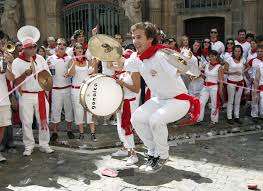 The Sanfermines reached their peak of popularity in the 20th century. The novel “The Sun Also Rises” (“Fiesta”), written by Ernest Hemingway in 1926 about a group of American and British expatriates who travel to the Festival of San Fermín to watch the running of the bulls and the bullfights, attracted people from all over the world to come to the fiesta of Pamplona.

Do you dare to come and celebrate?